What’s been going on?

The rumors (And I do mean rumors because unless and until I see medical records, I’m not buying it!) surrounding Usher Raymond have been the talk of the town lately. Not only did the beloved R&B singer allegedly pay a $1M dollar settlement to a woman who accused him of knowingly infecting her with the Herpes virus, but another woman has also filed suit making the same accusations. Before we get into just how hard it can be to validate such accusations, let’s first establish a timeline of events.

Usher Raymond married Tameka Foster after having dated for one year.

Usher is pictured with his son Usher Raymond V (also known as Cinco) alongside friend and bridesmaid to his wife, celebrity stylist Maya Fox  Davis. 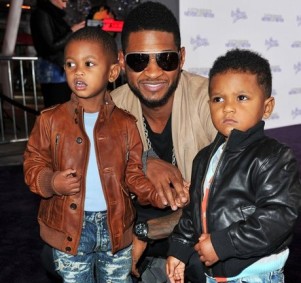 Usher filed for divorce from Tameka. It is speculated that the divorce is a result of a combination of Usher’s alleged infidelities and the strain Tameka’s near-death experience due to plastic surgery both placed on the relationship. 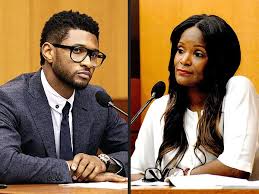 After a mud slinging all-out battle (In which Tameka’s lawyer questioned Usher about a 2008 incident where the children’s nanny abruptly left the family trip to Miami after catching Usher in bed with none other than…Maya Fox Davis) for custody of the singer’s two children.

Pay attention to the fact that Usher and Maya are pictured (multiple times, feel free to look it up) looking rather…cozy together in 2008; the same year the nanny allegedly caught them in bed together during the family trip to Miami.

Has Kanye West Lost His Mind, Or Do You Simply Need To Open Yours?

So what’s really going on?

The court papers allegedly filed by Maya in LA Superior Court (of which no credible record can be found) made claims that Usher became infected with Herpes between 2009 and 2010. Hmmm. If Maya and Usher had been hooking up since 2008, is it possible he could have contracted the virus from her? However, that’s far from a definite considering the fact that the virus can lay dormant in the system for quite a long time. Here are a few quick facts about Herpes according to the American Sexual Health Association:

What exactly did Maya allege?

Maya supposedly claimed in her alleged court documents that at some point during their relationship, Usher had “greenish discharge” coming from his penis. If you were to look up the symptoms for Herpes on any reputable website or even speak with your own doctor, greenish discharge from the penis IS NOT EVER listed as a symptom of herpes. Furthermore, she had sex with Usher on multiple occasions, (according to Tameka since 2008) without previously catching the virus. After one particular hook up, she allegedly showed symptoms 3 weeks later.

Jump back to that third bullet point up there. There’s really no telling when HE INITIALLY contracted the virus if at all, just as there’s no telling when SHE INITIALLY contracted the virus if at all. We’re also not privy to who else she was sleeping with during this period of time, considering she was just a jumpoff. For this reason, there’s no real way to tell who gave it to whom if they actually do have it. The money he paid to her would have basically been hush money. Money to keep her quiet as opposed to going through a long drawn out process that would have outed him before now. At this point, the only thing that is certain is absolutely nothing.

Where did this other chick come from?

Enter “Jane Doe”. Since Maya’s supposed payoff has come to light, yet another woman has come forward to first, sue the performer for $10M simply because of exposing her to the virus, then she upped the ante to $20M after allegedly finding out she definitely contracted the virus. Talk about an opportunist. This woman claims to have slept with Usher back in April of this year inside her Atlanta home. She claims protection was used at that time. Then she claims they slept together a second time in New Orleans and this time without protection. Funny thing is, how sick to her stomach is she going to be if Usher provides actual medical records to show he doesn’t even have herpes?

SMDH! Now Maya may have gotten paid in order to keep her mouth shut, but the “secret” is out now if any of this is true. If he chooses to take this particular battle with Jane Hoe all the way to court and dig through this girl’s life and medical records, I wouldn’t be the least bit surprised to find out this chick had a prior diagnosis, OR that she’s flat-out lying!

No, I’m not making excuses for the man

While it may seem as though I’m making excuses for Usher, or giving him a pass, I’m not. He cheated on his wife with her friend, and that friend possibly found a way to take him to the bank for it. Now he’s remarried, possibly cheated on the new wife, and now another chick is about to try to take him to the bank yet again. When is this man going to realize that his d*ck is causing him all sorts of trouble, and possibly costing him all sorts of money?

On top of all of that, if it’s true that he is going around handing out herps like candy, he’s all kinds of f*cked up and definitely deserves everything that happens as a result. Yes, I get glued to celebrity gossip just as quickly as the next person, but my logical side forces me to look at all angles. Angles such as a chick who smiles and laughs all up in your wife’s face as a “friend” while sleeping with you behind her back may not be the most credible person. A bandwagon riding homewrecking “Who needs protection after only two hookups” chick may just be looking for easy money.

The rumors, unless and until we see documented medical records for everyone involved, are just that, rumors. The alleged $1M dollar settlement to Maya as hush money for convincing him (or him knowing) that he knowingly infecting her would have been a given. But Jane Doe now filing suit making the same accusations definitely comes off as more of a “Let me get in on this easy money” move.

Considering how hard it is to validate all of these accusations, let’s hope everyone involved has learned to be a bit more selective about who they lay down with. It also wouldn’t hurt to maybe try fidelity in a marriage just once Mr. Raymond. It’ll be better for your health AND your pockets.

4 thoughts on “The Facts About The Rumors Surrounding Usher”